Differentiation in EU Foreign and Security Policy: EU Lead Groups in the Iranian Nuclear Dispute and the Ukraine Crisis 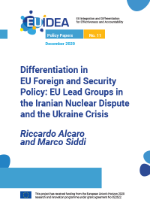 Since the creation of the EU, there have been instances in which a restricted number of member states have handled an issue of international security on behalf of the Union. While controversial, these “lead groups” have been a valuable practice. They can enable a European response in the context of urgent conflict management and complex international negotiations. While they do not drive further EU integration, lead groups have been effective in generating intra-EU consensus on specific issues and spurring the EU into action. The paper assesses the conditions and performance of this foreign policy practice through an analysis of EU lead groups in the negotiations on Iran’s nuclear programme and the Normandy mediation format between Ukraine and Russia. Lead groups are sub-optimal arrangements compensating for the in-built institutional shortcomings of unanimity-based decision-making in EU foreign policy. They have nonetheless shown significant potential in giving initiative and content to EU foreign policy, in that they either operationalise positions agreed at the EU level or create a policy where there had been none.