The making of Brexit: Legal aspects of the 2016-2020 negotiations 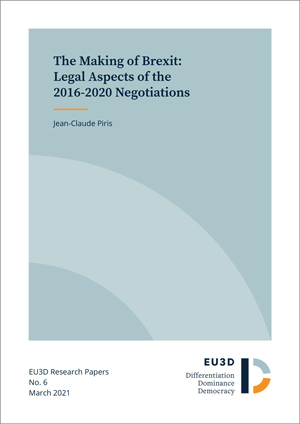 The UK left the EU on 1st February 2020, the day when the Withdrawal Agreement (WA) entered into force: Brexit was legally done. The UK was no longer an EU member state. It benefitted however from a transition period until 31rd December 2020, during which it continued to have most rights and duties of an EU member state. Both parties had to negotiate another agreement as a basis for their future relations, in particular in order to avoid WTO rules to be immediately applied to their mutual trade on 1st January 2021. They had to negotiate it during the eleven months left of 2020, thus in a very short time, given the difficulties. On 24th December, they agreed in extremis the Trade and Cooperation Agreement (TCA), about 1500 pages long. In order to avoid a gap after the end of the transition period, they decided to apply the TCA on a provisional basis on 1st January 2021, before its ratification and entry into force. The effects of Brexit began to be felt on 1st January 2021, taking into account that agreement. This paper aims at presenting the most important legal disagreements between the UK and the EU during the negotiations of both the WA and the TCA. During the first years of the period June 2016/December 2020, the UK’s policy on its future relations with the EU, inexistent at the time of the referendum, remained hesitant and unclear. British policy developed by successive steps. At first it aimed at keeping a close relationship with the EU’s single market. It later aimed at a weak relationship and at a hard Brexit. Under the leadership of PM Johnson, political ideology (“sovereignty first”) became much more important than economic interests.