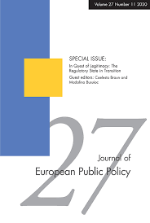 Research on differentiated integration (DI) in the European Union has burgeoned in recent years. However, we still know little about citizens’ attitudes towards the phenomenon. In this article, we argue that at the level of individual citizens, liberal economic values increase support for DI. Stronger preferences for equality, in contrast, make opposition to the concept more likely. Similarly, concerns about discriminatory differentiation at the member state level lead citizens to oppose DI. We test the theoretical claims by analysing survey data on citizens’ attitudes towards a ‘multi-speed Europe’. Supporters of DI, indeed, are marked by liberal economic attitudes. In contrast to general EU support, we do not find robust correlations with socio-demographic variables. Moreover, the data reveal striking differences amongst macro-regions: support for DI has become much lower in Southern European states. We attribute this opposition to negative repercussions of the Eurozone crisis.