Main navigation
Sub navigation
News > 2021 > DiCE Conference: What the EU should do to survive

DiCE Conference: What the EU should do to survive

EU’s current decision-making rules do not allow it to react to the challenges it faces, Jean-Claude Piris argued when addressing the DiCE Networking Conference on Brexit.

Watch his keynote speech and all sessions of the conference here. 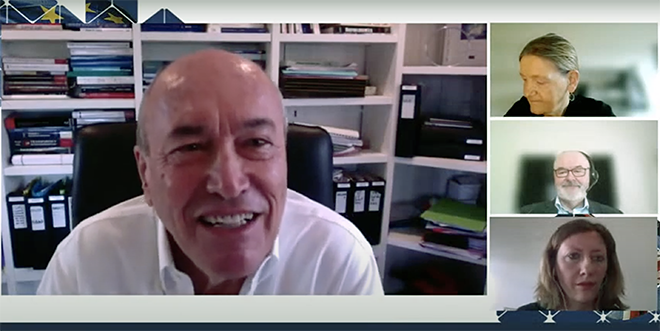 On 11 and 12 March 2021, we held our online DiCE networking conference on Brexit, with the goal of analysing ‘Differentiated Integration (DI)’ in the context of Brexit and on how much, and what forms of DI lead to a more effective, cohesive and democratic European Union.

The conference kicked-off with a keynote speech by Jean-Claude Piris (former DG of the EU Council's Legal Service), who offered insights on internal differentiation and its impact on the future of the EU. His predictions centered around two core tenets: that a ‘hard Brexit’ was unavoidable after the 2016 UK Referendum, and that the EU’s current decision-making rules do not allow it to react to the challenges it faces.

Piris asserts that since 2008, significant differences in member states’ points of view led to different crises in the EU that risked regressing integration. Consequently, in order for the Union to survive, it must get its members to respect the Rule of Law, must promote economic recovery and must become a credible actor on the international polity scene. “Is the EU able today to fulfill these needs? Can it adapt its decision to the heterogeneity of its members?”, he asked. “The fear of being relegated to a second-class Europe is still greater to some member states than the fear of the EU becoming less relevant on the global scale.”

According to Piris, there are three potential solutions to help strengthen the EU. The first proposal is that the EU must focus on developing converging uniform polices on economic, migration and defense issues. However, Pris pointed out that, “[this] politically utopian conclusion is easier said than done”.

The definition of a genuine migration policy, the consolidation of the Eurozone and the protection of the Rule of Law, are challenges that call for an orderly vision of what the new EU should look like.

The second idea is to establish four additional, but optional, ‘clubs’ for economic, migration, security and foreign policy. These supposed clubs would continue to use the present EU institutions, but each council’s and parliament’s composition would vary to provide for different decision-making processes and lines of accountability. Pris contends that this proposal is not only confusing, but also potentially disrupts the unity of the European Union, and is therefore impractical.

The last solution, and the most favored by Piris, is to reduce the requirement for unanimous decisions and restrict vetoing to only vital decisions. In his words: "As it currently exists, the veto allows the tiny majority of citizens to prevent the will of the vastest of democratically-elected majorities."

Piris argues that the EU should instead replace the right of veto by a ‘mini-collective veto’ that requires a minimum of three or five member states that cumulatively represent at least 5 to 10% of EU citizens.

Jean-Claude Piris's insightful keynote set the tone for the rest of the conference. His lecture made it very clear that after the fallout and consequences of Brexit and other recent parliamentary crises, the European Union must in one way or another, attempt to keep and strengthen member unity and offer more possibilities for differentiation. As he put it: “The definition of a genuine migration policy, the consolidation of the Eurozone and the protection of the Rule of Law, are challenges that call for an orderly vision of what the new EU should look like. The usual way of handling European affairs may have reached its limits. I do think the day has come to acknowledge that such genuine reforms are necessary.”

Watch all sessions of the DiCE Networking Conference on Brexit:

Welcome by the organisers and keynote speech by Jean-Claude Piris

Roundtable I – Brexit in comparison: models of differentiated (dis)integration

Roundtable II – Brexit next: the future of EU integration and EU-UK relations

Witness panel: The view from stakeholders involved in Brexit

A version of this article was first published by the Robert Schuman Centre for Advanced Studies at the European University Institute.